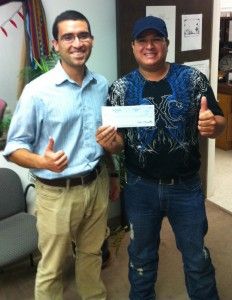 An important part of the EJC’s legal action for worker justice is done by law students in the Transnational Worker Rights Clinic at the University of Texas Law School, which is operated as a partnership between the EJC and the UT Law School. In one wage case just resolved successfully, the law students represented a group of immigrant kitchen workers, empowering them to recover unpaid wages for their work at the Pho Dan restaurant in North Austin. The kitchen workers had been required to labor more than 70 hours a week for several years without ever being paid overtime or even the basic minimum wage as required by federal law. The law students, supported by an EJC attorney, took legal action and successfully recovered over $20,000 in unpaid wages for the workers, and persuaded the restaurant to change its pay practices to begin complying with the law.

In October 2011, EJC and the Law Clinic won a particularly hard-fought case involving two construction workers who were owed wages for their final week of work on a three-week construction project. The workers were employed by NEC Power Systems to perform painting and texturing improvements to NEC’s new office building in Liberty Hill, TX in January 2010. The law students from our Clinic quickly helped the workers file a mechanic’s lien on NEC’s property to secure their wage claim. However, for the next year and half, the employer fought to avoid the lien and refused to pay the wages he owed. Even after two court rulings upholding the validity of the workers’ lien, it was still necessary for EJC and the Clinic to file a suit to foreclose on the lien. Several of our Law Clinic students tenaciously pursued to the legal action until the employer was finally forced to pay the withheld wages. Much of the work to finally win the claim was done by Joey Delgado, a 3rd-year law students in our Transnational Worker Rights Clinic. Delgado first began working on the case in the spring of 2011, advancing the foreclosure lawsuit. Delgado then returned this fall as an Advanced Clinic student to complete work on the case. “Our office’s ability of our office to uphold the mechanic’s lien in the courts finally moved the employer from a position of uncompromising opposition to a posture of reasonable negotiations,” reflected Delgado. “After all the unrelenting work we had to do, it was very satisfying to finally see these workers paid.”

The case illustrates the persistence that the EJC’s clients, lawyers, and Clinic students often have to sustain to wrestle these wage claims through to a successful conclusion. EJC client Fernando Diaz, who is a proud husband and father of three kids, declared that he was glad he didn’t give up on his case, even though it took almost two years to get justice. “I am happy to finally have this case settled; now I can use the money I earned to pay my rent and support my family.”

Law student Joey Delgado: “After all the unrelenting work we had to do, it was very satisfying to finally see these workers paid.”