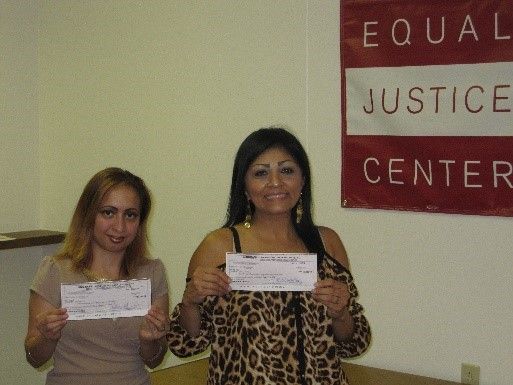 Just days before Labor Day, thirty-four food service workers who were employed at San Antonio-area Subway, Marble Slab Creamery, and Great American Cookies franchises filed dismissal papers after settling their Fair Labor Standards Act (FLSA) lawsuit for unpaid overtime wages. The workers’ settlement, totaling $195,000, was reached following more than two years of litigation against their former employers. The workers alleged in the lawsuit that they were not paid for all of their hours of work and were not paid at the legally required overtime rate (time-and-a-half) when they worked more than 40 hours in a week.

The lawsuit, Pacheco et al. v. Aldeeb et al., was filed in federal court in San Antonio in February 2014. The plaintiffs were represented by the Equal Justice Center and Texas RioGrande Legal Aid, two non-profit organizations providing free legal services to low-income workers in Texas. In court documents, the plaintiffs alleged that their employers required them to work off the clock in a variety of ways, such as requiring them to perform work before clocking in or after clocking out or not paying for compensable travel time between worksites. Some plaintiffs also alleged that they were not paid for time spent working during their lunch breaks, performing administrative work outside the stores, and working at off-site catering events.

“I worked long hours and did not feel that I was properly paid for my hard work. I’m glad that my co-workers and I stood up for our basic workplace rights to overtime pay,” said Brenda Pacheco, one of the named plaintiffs in the case.

“Though overtime violations are all too common, the law empowers low-wage employees to access the courts to correct those injustices,” said Sarah Donaldson, an attorney with Texas RioGrande Legal Aid who represented plaintiffs in the case.